Why use LEDs in sports field lighting equipment?

While most other lighting applications are now completing their transition to LED light sources, the manufacturers of the floodlights which illuminate football pitches, tennis courts and other large outdoor sports fields have until recently retained a widespread preference for conventional High Intensity Discharge (HID) lamps. HID lamps offer high flux and a high-quality light output, and the electrical and optical considerations for floodlight designers are easy to deal with. 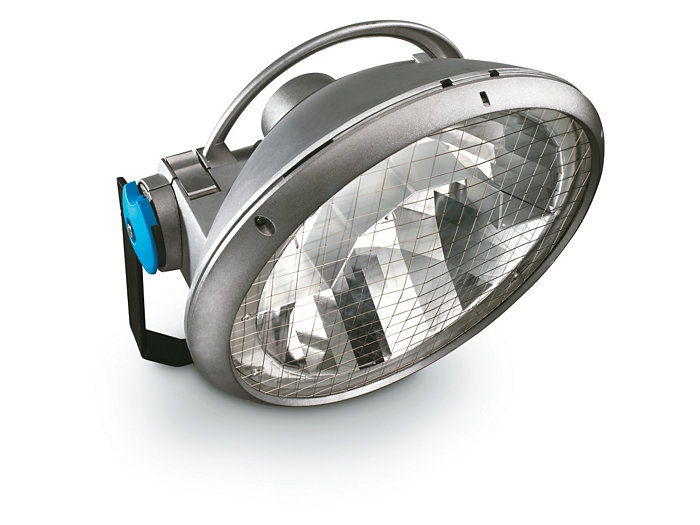 But there are signs that the tide might be turning towards new and improved LED and driver solutions: for instance Signify (formerly Philips Lighting) grabbed headlines with its installation of LED luminaires to light the playing surface of the Ekaterinburg Arena in Yekaterinburg, one of the Russian stadiums that hosted 2018 World Cup football matches.

So which factors are encouraging the switch to LED light sources in sports field lighting? And how different is the design of an LED-based sports field luminaire from that of an HID-based floodlight?

There are two strong reasons why operators of stadiums and sports arenas will be happy to see the end of HID lamp technology. First is the limited operating lifetime of the lamps: a typical B50 lifetime (mean time before failure) of just 5,000 hours. This means that HID floodlights require frequent lamp replacements. And since the lamp to be replaced might be as much as 25m in the air at the top of a narrow pole, special access and safety equipment and skilled technicians are required – at a considerable cost.

The other main drawback of HID lamps is their behaviour in the event of an unexpected shutdown, for instance when a stadium’s power circuit fails. HID lamps require a 10-15 minute cool-down period before restarting, and then after re-starting take 5 minutes to reach full brightness. This period of darkness and partial lighting is potentially catastrophic if a power failure occurs during a well-attended match: the safety and public order consequences of holding a crowd of tens of thousands of people inside a dark stadium, with play suspended, are extremely serious.

An LED-based light source eliminates both these problems: the lifetime rating of an LED light source in a floodlight depends on the way in which the design is implemented, but will typically be in the range of 50,000 to 100,000 hours; and LEDs can be turned on instantly at full brightness when the power is switched on or restored after a mains power outage.

There are other important benefits to the use of LED light sources for sports field lighting:

The advantages to be gained from the use of LEDs in floodlights are, then, very considerable. But the nature of the application puts particular constraints on the design of high-mast LED lighting, and until recently these have hindered OEMs’ attempts to use LEDs in sports field lighting. During 2018, however, suppliers of LEDs, drivers and optics introduced a number of new products which address the special requirements of high-mast stadium lighting, and as this article shows, it is now easier than before to create an effective floodlight design based on an LED light source.

The difficulty of making LED floodlights stems from a combination of strict requirements. The playing surface which needs uniform illumination and no shadows is large: for tennis, the court itself is 260m2 and the total area including space for line judges, players’ seating and so on is around 680m2. For football the space is even larger: the pitch is around 7,000m2 and the total illuminated area is around 10,000m2. The illumination requirement depends on whether the field is for use by amateurs, and requires less bright light, or for a high-level professional spectator sport: in the latter case, illuminance of >1,000lux might be required at the playing surface. Depending on the height of the mast and the size of the playing area, this calls for a light output ranging from hundreds to thousands of kilolumens from the light source.

And this huge light output has to be provided from the smallest possible light-emitting surface. This is to avoid obstructing spectators’ view: for mast-mounted lights, the pole should be as narrow as possible, and this calls for a small light source which will impose the lowest possible wind loading on the pole; if mounted on the roof of a stadium, the lamp should be small, and also light, since the structure of a stadium roof is not normally designed to support heavy objects.

In professional stadium lighting, light quality is also tightly specified by TV broadcasters. The Television Lighting Consistency Index (TLCI) was developed by the European Broadcasting Union to measure the ability of a light source to properly render colours when viewed by a video camera. There is a correlation between the TLCI and the Colour Rendering Index (CRI), which measures the accuracy of colour rendering as perceived by the human eye rather than by a camera. But specifiers of LEDs should not assume that a high-CRI LED will also meet TLCI requirements. 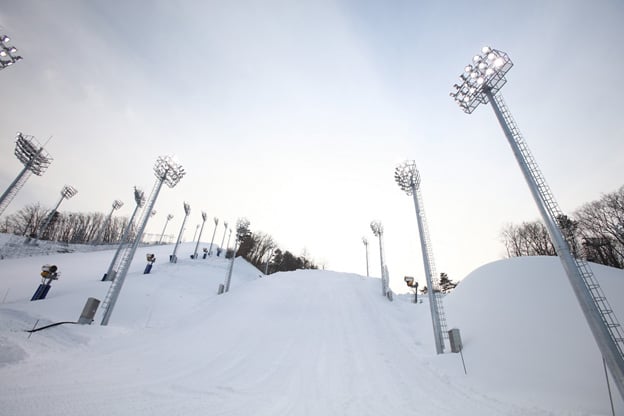 The HID lamp is a particularly good solution to the problems of size and weight: a single 2kW HID lamp produces 150,000-200,000lm, so few lamps need to be mounted on each mast.

The challenge when designing with LEDs is keep the Light-Emitting Surface (LES) as small as possible – difficult when using general-purpose LED chips, which typically produce around 300lm each. With such devices, a high-mast floodlight would require too many units and would occupy too large an area.

Now, however, Nichia has introduced the NV9W149AM, a multi-die LED which produces a nominal output of 2,490lm of CRI 90 light at a drive current of 2.1A, although it can be driven at a continuous current of up to 3A. It is supplied in package measuring 7mm x 7mm x 3.1mm. Offering high efficacy and light quality, it enables system designers to achieve the very high light output required even by professional sports stadiums in a luminaire with a small total footprint.

It is possible to use Chip-on-Board (CoB) LEDs, which also offer high flux density, but the system footprint will be larger than that of NV9W149AM-based designs. In addition, the relatively high voltage of CoBs and the low creepage and clearance that they offer will limit the number that can combined in series in the same circuit.

In either case, the operation of many high-flux LEDs in close proximity to one another generates high levels of waste heat, and so the PCB material selection and board layout will call for a good deal of design expertise.

The design challenge is not limited to the selection and integration of the LEDs: the choice of the power supply to the LEDs also has serious consequences.

Two important factors determine the choice of LED driver. First, the driver supplies a high load – potentially more than 500W in lighting systems for professional football stadiums, for instance. No driver is 100% efficient, and the power loss is dissipated from the driver as waste heat. A 500W driver operating at a high 95% efficiency will therefore be generating 26W of waste heat. Unless properly managed, this could quickly cause the power system to exceed its thermal safety shut-down threshold.

Designers of LED lighting equipment tend to think of an integrated driver unit as a self-managing black box that requires no external thermal management. In this case, however, the designer would do well to consider how large amounts of heat can be safely drawn from the case of the driver to the ambient air without overheating the air in the system’s enclosure. 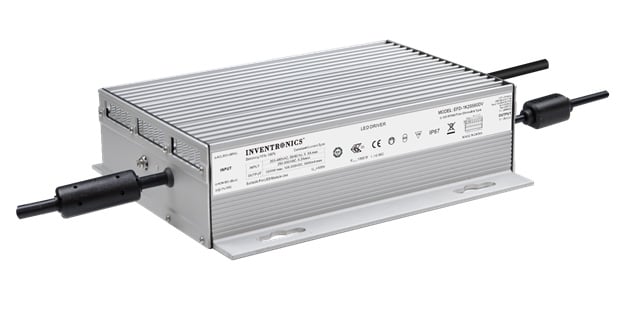 The other concern in driver selection is weight: the lighter the luminaire, the narrower the pole can be, and the less structural support is required for canopy-mounted lighting. The EFD-1K2SxxxDV series of 1.2kW LED drivers from Inventronics, for instance, is an excellent choice for high-flux luminaires. A robust 6.6kg, it weighs less than an equivalent power system consisting of multiple drivers each with a lower power rating.

An alternative to mounting the driver at the top of the mast, next to the LEDs, is remote mounting at the foot of the pole. This is a novel approach to LED power-system design, for which there is no requirement in other applications. Because of the long distance that control signals must travel between a remote driver and the LEDs, remote mounting can impair the operation of the feedback loop, leading to instability in the power output and in turn causing perceptible impairment of the light output. In addition, the designer will have to account for the voltage drop along the cable, and handle system Electro-Magnetic Compatibility (EMC) requirements. Driver manufacturers, however, are beginning to take the requirements of remote mounting into consideration as they develop special new driver products.

In their choice of LED driver, high-mast floodlight designers will also want to consider the specifications for output ripple, which causes light flicker and so is of critical importance for the lighting of broadcast events: it should be limited to less than 2%. It is also important to consider all operating conditions, and especially start-up in cold weather. The forward voltage of LEDs is higher when cold than at a normal hot operating temperature. Designers should allow considerable headroom in the driver’s output-voltage specification above the level expected in normal operation.

The choice of the dimming interface is also of importance to enable dynamic lighting features, such as flashing or dimming patterns. Fixture manufacturers tend to look for DMX control because of its faster response time compared to DALI. Few high-power drivers offer a DMX interface, and this makes DMX-to-0-10V converters such as Inventronics’ CNV-DMXR valuable.

The last important element of the system for consideration in sports field lighting is beam control. In a typical four-mast topology, with a mast at each corner of a rectangular playing area, the light must throw light precisely onto a quadrant of the total surface from a great height. 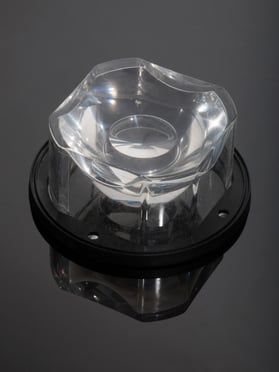 Conventional LED collimators provide for excellent beam control from a small point source of light. The small optical losses in a collimator are dissipated as waste heat. In very high-flux systems, this generates a lot of heat, and in fact too much for the polycarbonate (PC) or PMMA materials normally used in lenses for LEDs, which tend to deform at high temperature.

Here too, component suppliers have been developing specialist products suited to sports field lighting. For example, LEDiL supplies the FN16258 STELLA-RS, a lens which produces a 23° spot beam with an LES of 19mm and which is compatible with LEDs with an LES of up to 30mm. It is made of silicone, a material which is resistant to very high temperatures, but which is heavy and less mechanically stable than PC or PMMA.

A different approach is to use reflectors, but the need to leave sufficient creepage and clearance between the reflector and the high-voltage LED array could result in some optical losses as light leaks out behind the leading edge of the reflector.

> The FN16258 STELLA-RS lens from LEDiL is made of high temperature-resistant silicone. (Image credit: LEDiL)

Improving the total cost of ownership and much more

As so often with LED technology, the extra initial cost of LED-based sports field lighting will be recouped over the lifetime of the system, in reduced maintenance and replacement expenses and lower energy bills. The quality and the flexible operational controls of an LED lighting system provide important additional benefits. As this article has shown, the development of an LED-based replacement for traditional HID lamps requires careful consideration of various electrical, thermal, mechanical and optical issues – but as Ekaterinburg’s World Cup stadium shows, the LED is the light source of the future for stadium lighting.