PCB in harsh environment: which precautions shall be taken?

Some categories of electronic devices must operate in particularly severe conditions, such as salt spray, salt, dust, sand, or extreme temperatures. To ensure that the electronic circuit continues to operate as in normal conditions, the PCB must be designed to withstand these events without being damaged. The PCBs used in the automotive, industrial or aerospace sectors, for example, are continuously subjected to vibrations, mechanical stresses, shocks, very wide thermal excursions and more.

Apart from some classes of electro-medical devices, few electronic devices operate in environments free of dust, vibrations, humidity and with strictly controlled temperatures. In reality, it is necessary to deal with:

Challenges to be faced

The main challenges facing PCBs for harsh environments can be summarized as follows:

To prevent damage caused by atmospheric agents, a non-conductive protective coating known as conformal coating is applied to the PCB after assembly (Figure 1). This is commonly applied to PCBs for consumer, appliance and mobile devices, where it is common to operate in the presence of moisture, dust or other harsh environmental factors. The protective layer applied to the PCB allows the moisture present in the PCB layers to flow outwards, while preventing external agents from reaching the board and its components, compromising their operation. In addition to increasing reliability, the conformal coating extends the life of the circuit. 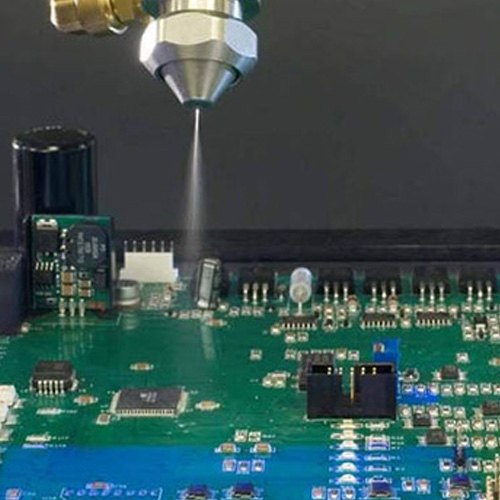 The most common types of conformal coating are silicone, acrylic resin, polyurethane and p-xylene, each capable of providing a certain level of protection. Silicone, for example, can cover the widest range of temperatures and is therefore the best choice for applications with extreme temperatures. On the other hand, silicone has poor adhesive power on some types of substrate and lower chemical resistance than acrylic resin. The latter, due to its rigid structure, is not particularly suitable in the presence of shocks and vibrations. Polyurethanes offer high resistance to humidity, abrasion and vibrations, withstand low temperatures well but not high temperatures. It follows that they are mainly used in applications with temperatures from -40°C to +120°C. P-xylene is a consistent material that offers high protection but is expensive and being sensitive to contaminants must be applied in a vacuum.

Regarding the application of the PCB conformal coating, four techniques can be used: dipping, automated selective coating, spraying and brushing. Each of these alternatives achieves the same goal: to completely cover the PCB including the sharp edges and all edges of the board. After application, the conformal coating is cured by air drying, oven drying or by UV light.

The increasing density of the components on the PCB leads to an inevitable increase in operating temperatures, a condition that in the long run can compromise the integrity of the welds or of the layers themselves due to the expansion and contraction of materials with different physical properties. A high temperature PCB should therefore use a dielectric with a glass transition temperature (Tg) of at least 170°C. A rule normally applied is to allow operating temperatures up to about 25°C lower than the Tg value of the material used. In addition to the choice of material, the high temperature of the PCB can be managed by removing the heat produced and transferring it to other areas of the PCB. If the hot component is mounted on the top side of the PCB and has a sufficiently large surface, a heat sink can be installed on it that can remove the heat first by conduction (from the component to the heatsink) and then by convection (from the surfaces of the heatsink to the surrounding, colder air).

If the hot component is mounted on the underside of the PCB and it is not possible to mount a heat sink, the technique typically used by designers is to insert a large number of thermal paths on the PCB to transfer heat away from the hot component to a layer. of copper on the top of the PCB, from where it can be further transferred to a suitable heat sink. Typically, PCB mounted heat sinks are large, with finned or corrugated surfaces to increase the dissipation area. Fans can be added to improve forced convection cooling, compared to natural convection cooling.

One of the methods traditionally used to counter the effects produced by high temperatures is to use heavy copper technology. This increases the maximum current that the PCB traces can carry and, due to the lower resistance, reduces heat losses.

For long-term space missions, the only option available is to use "rad-hard" components. These components are much rarer and consequently more expensive than standard components. For short-term space missions (up to one year), the use of standard commercial components may be allowed, subject to analysis and verification of their ability to withstand radiation. This allows you to reduce the design costs of space equipment and expand the selection of components available for design. By applying different hardware design techniques, the effects produced by radiation can be countered. At the PCB design level, for example, it is important to ensure adequate grounding of all metal parts.

To provide protection against shock and vibration, the PCB can be installed in a container into which resin is poured to fully encapsulate it. The higher the resin layer, the better the degree of protection. Unless all components on the PCB have a uniform height, the thickness of the resin layer will however vary across the board, providing slightly different levels of protection for each component. The thinnest resin layer therefore corresponds, in the worst case, to the level of protection offered on the entire board. Before even considering resin encapsulation, the PCB must be thoroughly cleaned. Surface contamination can negatively impact the levels of protection offered by encapsulation, particularly in cases of chemical resistance (as it provides an easier path for chemicals to enter). Additionally, contaminants will negatively affect the resin's ability to absorb physical and thermal shocks due to the weak formation of layers between the resin and the PCB, which ultimately leads to delamination. Keeping the PCB clean and dry also ensures protection against rust and ionic contamination. Corrosion can be avoided both with the application of the conformal coating, as well as through surface finishes such as HASL (the PCB is dipped in an alloy of tin and liquefied lead and subsequently the alloy deposits are leveled with hot air jets) and ENIG (gold dipping). Figure 2 shows the detail of a PCB with ENIG finish. 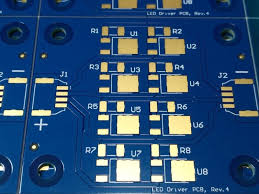